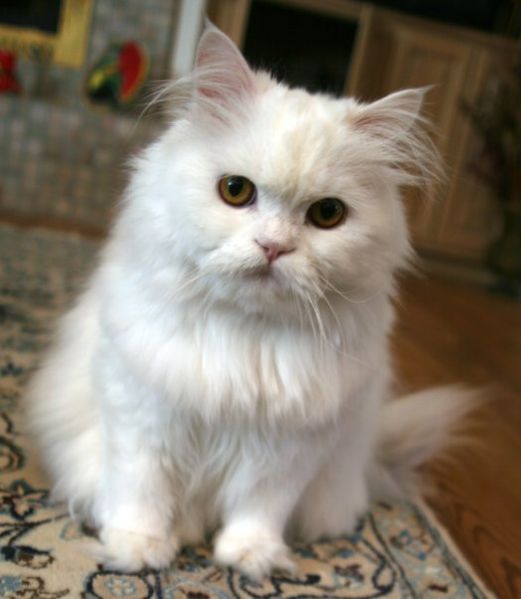 The Persian cat or also known as the “Persian Longhair” in the English-speaking countries, is a long-haired breed of cat that is characterized by its round face and short muzzle. They are widely known as “Iranian cats” in the Middle East region and as “Shirazi cats” in Iran. Persian cats are known to be dignified and docile and they are quiet and sweet pets. Let us know more about the history and characteristics of the Persian cat breed.

The Persian is an ancient cat breed that originated in the cradle of civilization, Mesopotamia, which was later known as Persia and now the modern-day Iran. Its long hair is probably because of a natural mutation. It has a striking appearance that attracted the attention of Pietro Della Valle, a 17th-century Italian nobleman and world traveler who was credited with bringing the first longhaired cats to Europe in 1626. During that time, the cats had shiny and silky gray fur.

Breeding and showing cats became popular until the late 19th century. Longhaired cats from Persia, Afghanistan, Turkey, and other exotic locales were simply known as “Asiatic” cats and they were often bred together. In 1871, Persian-type cats were among the breeds exhibited at the Crystal Palace cat show. Back in those times, they were popular pets and they had a special cachet because Queen Victoria was fond of the breed. Even during the Victoria era, association with a celebrity ensured the desire of people with animals.

The Persian cat breed was molded to its present-day appearance through selective breeding by cat fanciers. They bred them to have a round head, short face, chubby cheeks, rounded ears, big eyes, snub nose, and a sturdy body. Their fur became longer than that of the Angora cat, and their legs became shorter. The Persian cat eventually surpassed the popularity of the Angoras.

It was in the late 19th century when Persian cats were first imported in the United States. When they were introduced, they also became favorites, edging out the longhaired Maine Coon cat which uses to be an American sweetheart. After more than a century, the Persian cat become the most beloved cat breed in the world which is prized for its sweet personality and beautiful appearance. Characteristics of a Persian Cat

Persian cats are usually medium-sized cats but are massive and heavily boned. Because of their masses of fur, they can appear larger than they really are. Male Persian cats can weigh up to 12 pounds while females on the other hand, can weigh from 8 to 12 pounds. It is an extreme-looking breed. It has a short body but has thick legs and a short but thick neck. They have round heads with large, round eyes. They also have thick, full, and long coats that are fine but should be lustrous and glossy.

Persian cats can come in colors white, red, cream, black, blue, chocolate, silver, golden, brown, and seal. They can also have patterns in solid color, tortoiseshell, bicolor, tricolor, tabby, smoke, shaded, and points. They are also not hypoallergenic because they have a high tendency to shed.

Persian cats are known to be sweet and quiet pets. They are ornaments to any home and they can enjoy sitting on laps and petted by their humans. They are affectionate but discriminating. It’s because their attention is for family members only and for a few guests whom they feel they can trust. They do not like loud environments and they prefer a serene home.

When it comes to households with a lot of children and dogs, Persians are not the best choice. But they can live well with gentle children and friendly dogs who will not chase them. But otherwise, they can cause them anxiety. Caring for a Persian Cat

The most important thing to remember when caring for a Persian cat is that daily grooming is needed. It’s because its long and beautiful coat will not stay clean and tangle-free alone. You should gently and thoroughly comb and brush it every day. Regular bathing is also important at least once every month.

They also suffer from excessive tearing sometimes, that’s why it’s important to wipe the corners of their eyes clean daily to prevent stains from forming under their eyes. You should also brush their teeth to prevent periodontal disease.

The Persian cat is also an indoor-only cat because it is not a scrapper and it would fare poorly against other animals such as dogs, coyotes, and other outdoor dangers. Aside from that, its coat is not made for shedding dirt and leaves, which means, if you let it go outside, you will need more time to groom your pet afterwards. Letting them go outdoors also puts them at risk of being stolen because they are really beautiful cats.

For Persian cats to stay in good condition, they need to have their nutrition controlled. They are not known to be energetic that’s why you need to pay attention to their nutrition and regular exercise to keep them in top condition. When it comes to food, they must have meat because they are carnivores of the highest order. You can feed them at regular times or twice a day. Both wet and dry foods can be beneficial to them and the amount you should give depends on your pet’s age, size, and body weight. Just make sure that you don’t overfeed them.

The Persian cat is indeed a lovely cat breed. If you’re looking for a sweet and loving companion in your quiet home, then a Persian cat might be the perfect pet for you.