Famously known as the first dog to ever reach the outer space, Laika was launched to test the safety and conditions of sending a human in space. On November 3, 1957, she occupied the Soviet spacecraft Sputnik 2, which was sent to orbit the Earth. These are the only facts people most know about her, and many might be unaware of her sad and tragic fate.

Here are some of the little-known facts about Laika, the first dog in space: 1. Laika was sent on a suicide mission – a sacrifice for humanity.

Scientist knew and expected beforehand that she was going to space and would never return alive. The spacecraft they built was lacking the technology to ensure a safe re-entry to Earth because it was actually rushed out of the demands of the Soviet leader, Nikita Khrushchev.

In the original plan, Laika was meant to come home. Construction for a more advanced Sputnik 2 was underway, but it would not be finished until December. Khrushchev viewed Laika’s mission as a propaganda and he wanted its launch to be in the right timing with the 40th Anniversary of the Bolshevik Revolution. The time given to develop the spacecraft was enough to finish it, but not enough to make sure it would come back. 2. Laika wasn’t actually the first living being to be ever sent to space.

In 1947, fruit flies were launched into aboard a V2 rocket to study effects of radiation at high altitude. The next year, the same spacecraft contained a rhesus monkey.

A dog named Albina was launched by the Soviets, has reached halfway into orbit and made it back to the ground safely. She was Laika’s backup. Some sources say Albina was the first choice for Sputnik 2, but because she already did her job, Laika was chosen to be sent into the mission because of her calm temperament. 3. Laika was trained by being placed in increasingly smaller cages.

The Sputnik 2 was just a little bigger than a washing machine. To get her ready, she and the other dogs were placed into small cages so that they would be trained in claustrophobic conditions for 20 days. After that, they were put into smaller and smaller spaces.

Being trapped in cages caused constipation to dogs, and it caused their general condition to deteriorate. Laxatives weren’t effective either. The scientists learned that the dogs could only adapt if they would learn how to live through it, so the dogs stayed in cages for long periods of time until they would forget that they have been elsewhere before. 4. Scientists made Laika feel loved before she was sent to space.

Dr. Vladimir Yazdovsky thought it would be nice if Laika would experience life as a dog with a loving family before she dies. He brought Laika home so that his kids could play with her. On the day of the launch, the team said goodbyes to her, kissed her nose and wished her bon voyage – knowing that she would not survive it up there. 5. Laika was very scared during the blast off.

During the launch of Sputnik 2 in space, Laika was extremely terrified. Her heart rate and breathing increased to three to four times her normal rate, as she couldn’t understand what was happening to her. After three hours of weightlessness, her heartbeat returned to normal. 6. The public wasn’t informed of Laika’s real cause of death until 2002.

The Soviets claimed that Laika survived her first day in space. Like how they planned the trip to be, they said she drifted in orbit around the planet for days, and then she ate the poison they prepared to euthanize her. However, some of them gave conflicting statements saying she died from suffocation; and some claimed she died because the batteries failed. Since then, many rumors spread about the exact manner of her death.

In 2002, former Soviet scientist Dimitri Malashenkov finally revealed the truth during the World Space Congress in 2002. Laika died within seven hours during the fourth circuit of the flight due to overheating. Because the spacecraft was hastily built, the temperature control system malfunctioned. Sputnik 2  got hotter and hotter – it went past 100° F and then rose to extremes. Laika began to panic once again, as scientists saw her heartbeat racing faster and faster until they couldn’t pick up any heartbeat anymore. 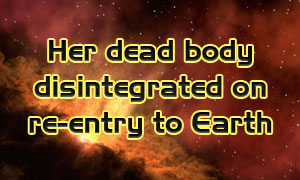 7. Her dead body disintegrated on re-entry to Earth.

Sputnik 2 remained in space for five months. On April 14, 1958, UFO sightings were reported along the east coast of US, but it was actually the satellite being torn apart on re-entry. The capsule, along with Laika, disintegrated as it dashed toward the Earth. 8. The mission did little to accomplish the original intentions of Sputnik 2 launch.

Laika’s voyage only proved that living things can be sent to outer space and survive, as before, it was a mystery. That information helped scientists develop spacecraft for re-entry to space using more dogs, and eventually, cosmonauts. But it was considered a great loss, as the study might have proved more if only Laika was launched on a spacecraft that could ensure her safe trip back home.

Oleg Gazenko, a member of the Sputnik 2 team expressed his regret, saying, “The more time passes, the more I’m sorry about it. We shouldn’t have done it… We did not learn enough from the mission to justify the death of the dog. “

Her pre-determined fate, however, sparked worldwide debate on the ethics of animal testing. Laika helped raise awareness about the issue.

Indirectly, Laika and Russia’s early space accomplishments provoked the US, eventually leading to the creation of the NASA space program that launched men to the moon.