Many people, even dog lovers, aren’t aware of their pet’s origins. You’d be surprised that your pets may have come from origins way farther (and maybe more mystical) than you’d expect. Many of the popular dog breeds that are also registered on the American Kennel Club originated from Asia. Check them out and see which of your dogs belong on this list! This breed has become increasingly popular nowadays popular due to the “doge” and other related memes that have been proliferating on the Internet. Of Japanese origin, this spitz breed was brought to America more than 60 years ago but it was only in 1992 when it was finally recognized by the American Kennel Club.

Shiba Inus have a double coat which comes in many colors such as white, tan, black and red. They look almost fox-like. These adorable doggies are generally described as bold, independent (and too stubborn sometimes), confident, active and alert. Sometimes they are fastidious and behave like cats, e.g., licking their paws to groom themselves. Such wow. This wrinkly-faced cutie is also one of the most popular dog breeds in the West due to its charming, gentle, outgoing and playful personality. It goes along well with children and other pets.

Pugs have a somewhat royal past. These dogs are also one of the oldest breeds that have flourished since 400 BC. It was first bred in ancient China as a companion pet for the royal family members. From the Far East, the breed was then brought to Europe during the 1500s and became popular among the European royal courts. It was officially recognized by the American Kennel Club in 1885.

Because of its distinctive personality in spite of its small stature, the Pug is often described by the Latin phrase multum in parvo, which means “a lot of dog in a small space.” Shih Tzus are popular toy dogs due to their beautiful long coat, so if you are going to keep one, you should expect yourself to groom them regularly. But that’s OK, as the Shih Tzu gives you lots of love and affection in return. This dog is known to be also friendly, outgoing and trusting — it was really made to be a companion and family pet.

The word “Shih Tzu” means “lion dog” in Chinese because it was originally bred to resemble a lion as illustrated in classic Chinese art. The Shih Tzu is also one of the ancient dog breeds in the world; it used to be highly favored by the Chinese royal families. From China, Shih Tzus were later brought to the West only during the early 20th century.

However, this breed was almost on the brink of extinction during the Communist Revolution in China. At this point, there were only 7 male and 7 female Shih Tzus remaining; thankfully, dog fanciers sought to breed them and increase their numbers. It is widely believed that those 14 remaining dogs are the ancestors of today’s Shih Tzus.

The Shih Tzu was recognized by the American Kennel Club in 1969, and today they are popular as a companion and show dogs. The Pekingese got introduced to the Western world in the mid-1800s, when the invading European troops raided inside the Chinese Imperial palace where they looted everything in sight, including the Pekingese dogs. Then they brought these pooches to England where they became a particular favorite among the English noble families. In 1906 the American Kennel Club officially registered this breed.

The Pekingese’s most distinctive physical characteristics are their big, round eyes, flat face and long, gorgeous coat that comes in a range of colors and markings from brindle to brown to gray, to white. They are generally proud dogs, affectionate and friendly to their masters and even to strangers and other pets. The Chow Chow is also considered an ancient breed. It probably originated from Siberia or Mongolia about 2,000 years ago and was later used in China as guard dogs. The breed was officially recognized by the American Kennel Club in 1903.

The Chow Chow has a sturdy built, a thick coat, a ruff that resembles a lion’s mane, and a blue-black or purple tongue. Their instincts as a guard dog have somewhat led Chow Chows to become especially wary of (and even aggressive towards) strangers, and fiercely protective to its masters. Chow Chows also tend to be stubborn, that’s why socialization is important while they’re still puppies. Although not a particularly active breed, the Chow Chow still needs decent walks a day to stave off boredom as well as obesity. The Chinese Shar-Pei was finally introduced to North America in the 1970s, but it was not until 1992 when they were officially inducted into the American Kennel Club.

Chinese Shar-Peis are known to be protective and loyal to their masters, but their guarding instincts have made them especially suspicious to strangers, that’s why early socialization is important while they’re still puppies. 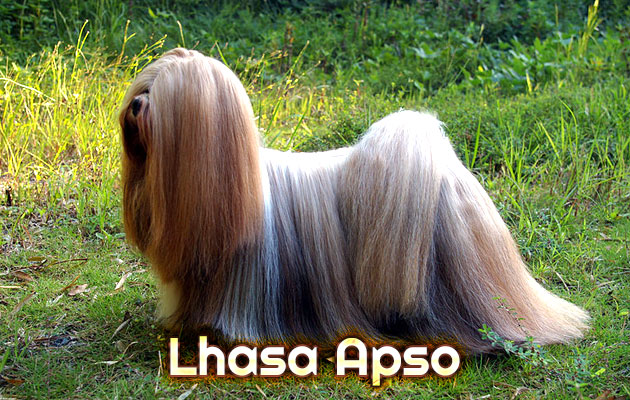 The Lhasa Apso is known for its long, straight, heavy and dense coat that comes in a wide range of colors including liver, black, white and gold, with markings and streaks of any of these colors.

The Lhasa Apso was originally bred in Tibet as a sentinel dog to guard the interiors of the Buddhist monasteries, and to alert the monks of any imminent danger or strangers that might intrude into the premises. The name of the dog is derived from Lhasa, the capital of Tibet, and apso which means “bearded” in the Tibetan language, alluding to the dog’s long fur on its face. It was officially recognized by the American Kennel Club in 1935.

This small and hardy dog is moderately active and enjoys some walks. It is smart and loyal to its masters but can be independent and a little stubborn sometimes. It has retained its instincts as a guard dog, meaning it can be suspicious towards strangers. Pet lovers who suffer from allergies will have no problem with Lhasa Apsos as they don’t shed too heavily or frequently. This large and strong breed is the dog of choice among the nomadic tribes of Tibet, Nepal, India and Mongolia. But especially in Tibet, this dog is used primarily to guard livestock against predators such as wolves and tigers.

The Tibetan Mastiff is one of the dogs that are only recently recognized by the American Kennel Club, in 2007. Since the recognition, Tibetan Mastiffs have skyrocketed in popularity which has led to unscrupulous inbreeding. This practice has become a problem for both legitimate dog breeders and dog owners as it brings several physical defects and health issues.

Tibetan Mastiffs are generally calm and mellow as well as devoted and loyal to their masters. But being sentry dogs, they are especially wary towards strangers and other animals. Tibetan Mastiffs make an excellent family guardian and companion, but they are not generally suited for living in a small space (like an apartment) due to its size. The Afghan Hound is a sighthound, meaning it hunts its prey by sight and speed (rather than smell like the other hound dogs). The Afghan Hound is tall and has a long head — typical physical traits of most sighthounds. This graceful-looking dog boasts a long, silky and beautiful coat which enables the animal to survive even in the chillier high altitudes. It was officially recognized by the American Kennel Club in 1926.

There are at least 13 known types of this dog breed found in its country of origin, Afghanistan.

The Afghan Hound is a dog of many interesting and appealing contradictions. At times it is independent and stand-offish; but when playmode comes, it can be cheerful and even quite funny. The origins of the Japanese Chin are still open to debate. Some say the breed originated from China, but other sources claim the dog was given to the Japanese royal family as a gift by the Korean monarchs during 6th century A.D.

While the Japanese Chin’s origins are still open to doubt, one thing is for certain: it is a charming, playful, bright, alert, and lovable pooch. As it was a popular dog among the Japanese noble families, the Japanese Chin retains its famously noble disposition, even towards strangers. Like the other Japanese dog breed, the Shiba Inu, the Japanese Chin exhibits cat-like behaviors such as licking its paws to clean its face.

The Japanese Chin was officially recognized by the American Kennel Club in 1888.