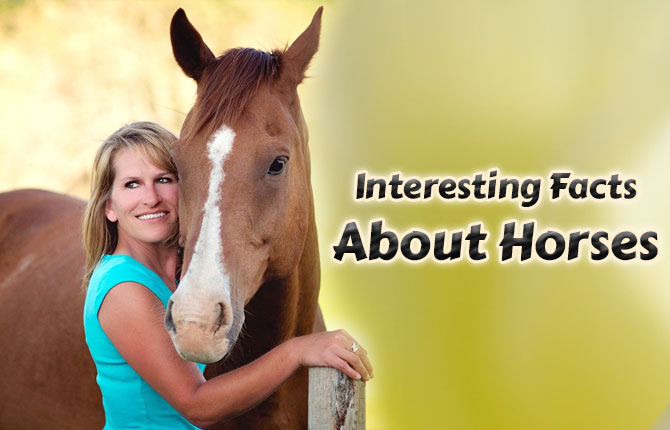 Apart from dogs, horses also deserve to be called a man’s best friend. They have been used as draft animals. They have won and lost alongside man in many wars and battles, as well as sports competitions. And they have accompanied man in his many outdoor adventures.

Here are some more interesting and amazing facts about horses: Because horses usually take in too little amount of protein and calcium, re-growing their hooves take them too long and slow. In order to influence faster hoof re-growth, horses should be given food supplements in addition to their normal diet. Old Billy was born in 1760 and died in 1822. His occupation was listed as a barge horse, who pulled boats up and down canals while walking on the towpath. When a horse pulls this amusing face where he bares his teeth, it looks like he’s laughing at you but he isn’t. He’s just doing a smelling technique called the “flehmen response” where the horse curls his upper lip to help get the scent into his olfactory glands. Horses are considered one of the smartest animals. Apart from their proficiency in learning tricks from humans, they have the ability to solve advanced cognitive problems which involve learning categorization. They are also capable of thinking and making decisions. While humans and other mammals can physically vomit, horses otherwise cannot. The power of the cut-off valve muscle actually does the job, unlike humans who can let the food travel back to the mouth. Another reason why horses can’t throw up is that the esophagus meets the stomach at an angle where the muscles are forced to shut when the horse’s stomach is bloated. This can cause colic problems in horses, where it may suffer severe abdominal pains. Its stomach may even rupture and cause the horse to die. Unlike human babies who may take about a year before taking their first steps, baby horses — called foals — can run only hours after being born. It may be based on evolutionary reasons that horses (as well as cows, zebras, etc.) need to walk early in life to be able to survive. Humans, on the other hand, had to be cared for before reaching to a certain age where they can fend off for themselves.

Another reason is that humans are among the bipedal creatures. It means that we need to develop our motor skills before being finally able to walk, compared to four-legged creatures like horses. A horse who is deprived of food, but has sufficient water intake, could survive up to 20 to 25 days. Horses are like humans in a way — they also communicate by way of different facial expressions. It’s because a horse’s eyes are located on each side of its head, it has the ability to see almost 360 degrees. This also enables it to see most things with its one eye only. The horse’s very large eyes enable it to see distant objects clearer than we humans do. This puts the horse into a great advantage as it uses this ability to see incoming predators clearly from afar. That’s why it’s okay to give your horse some candies like the peppermint hard candies, candy corn, licorice hard candies, some other fruit snacks, and even chocolates like M&M’s and Tootsie Rolls. But as all other things, too much sweets can be bad for the horse. You can also add CBD oil in their diet if they are having some health issues. But you should know the right dosage and the right way to administer CBD oil to a horse. You can get more info on this if you consult with a vet. Most horses create a pool of saliva in their mouth and owners can’t help noticing it. It seems like a normal thing for a horse. But when it excessively salivates, your horse may be suffering from oral problems like stomatitis and gingivitis. When a horse needs an REM type of sleep, or needs to sleep more comfortably, it usually lies down. But sometimes, a horse can sleep while standing up because that allows the animal to quickly run away from an attack in case it gets startled. The horse won’t need much time to get up before it can escape.