Cartoons have been a staple of television entertainment. Many of those well-known and best-loved cartoon characters of children (and even adults alike) are either dogs or cats. These are the some of the most famous cartoon pets who became a visible part of popular culture. Snoopy is Charlie Brown’s adorable beagle from the popular comic strip Peanuts. Created by famed cartoonist Charles Schultz, Snoopy was first seen during the 1950s. He also appeared in all of Peanuts movies and television specials. He became the most beloved characters from the Peanuts series. Snoopy is a loyal, good-natured beagle who is very imaginative – he imagines himself living different kinds of fantasy life to escape the boredom of a dog’s life. He creates machinery and rides his dog house as a flying ace to his “dog fights” against Red Barron, who wears a signature red scarf. Snoopy does not speak but makes his thoughts known through growls, grunts, sobs, laughs as well as pantomimes. He is also treated as one of the children and is allowed to play games with them.

When Snoopy was portrayed as a college student named Joe Cool during the 1970s, the Snoopy-mania took off, and merchandise like T-shirts, mugs, and posters featuring him in sunglasses became plenty in the market. Snoopy is still very popular today, as he is immortalized in bags, apparel, toys and many more. Pluto, a mixed-breed dog who debuted as a bloodhound, is a creation of Walt Disney Productions. He is one of the six biggest stars in the Disney universe, along with Mickey Mouse, Minnie Mouse, Donald Duck, Daisy Duck, and Goofy. Unlike Goofy (a dog) and the other characters who act like people, Pluto is the only one of them portrayed as a pet. In the 1931 cartoons, his character as Mickey’s dog and best pal was established. He first appeared in the 1930 animated movie “The Chain Gang,” the debut of Mickey.

Pluto does not wear clothes, unlike his co-stars. He also does not speak; he relies on facial expressions and comic gestures to show humor. Because his character does not rely on dialogue, he became a pioneering figure in cartoon animation. Garfield is the most popular cartoon cat in the world from a self-titled comic strip created by Jim Davis. Published since 1978, Garfield chronicles the life of the title character – the orange fuzzy tubby cat – as he lives together with his owner Jon and Jon’s dog, Odie. Garfield is the most widely syndicated comic strip, as it appears in roughly 2,580 newspapers and journals.

Garfield, unlike other characters, has deeply unlikeable characteristics. He is a grouch who hates Mondays yet he had no job. He is fat and loves to eat, especially lasagna and pizza (sounds like someone you know?). He enjoys destroying stuff and making snide comments usually to Jon. Garfield is also narcissistic, pessimistic, sadistic and sarcastic, but despite all these, he is dearly beloved. He represents the spirit inside of us – those selfish impulses, those sarcastic comments we long to tell people face to face, those complaints when there’s really nothing to complain about – we all can relate with them as we laugh at how funny it is. His one-of-a-kind humor is what made him so appealing to pop culture. The original television series starring this talking Great Dane and his teenage friends first came out in 1969 under Hannah-Barbera Productions. The show Scooby-doo cartoon is still alive today under Cartoon Network, and through the years, the show was kept alive by numerous spin-offs, specials and feature films. Throughout the show, Scooby-doo and his human pals Shaggy Rogers, Daphne Blake, Fred Jones, and Velma Dinkley go on one supernatural adventure after another, seeking to solve mysteries that leads to wacky chase scenes, and usually ends with uncovering a villain behind the “supernatural occurrences.”

Of all of his co-stars, Scooby-doo is most similar to Shaggy, as both of them are cowardly and perpetually hungry. He is a unique dog that can speak in broken English, usually putting the letter “R” in front of every word. Debuted in the 1940 MGM animated short “Puss Gets the Boot,” Thomas “Tom” Cat has suffered the torture of slapstick violence at Jerry Mouse’s hands for more than 7 decades, and yet he still survives until today. The Tom and Jerry cartoon uses violent gags for humor, which involves the use of dangerous tools and deadly methods, causing them to receive negative criticisms, considering it’s a show for children. However, no blood and gore were ever depicted and the comedy was effective.

Tom is a house cat originally created by William Hannah and Joseph Barbera, and throughout the years, he acquired human intelligence and used it in numerous attempts to capture Jerry. However, he rarely succeeds because of the mouse’s cleverness and luck. He has a superhuman level of elasticity and resilience, as he remains alive even after being electrocuted, cut in half or tied to a firework that set on up the sky. If you never watched Tom and Jerry, reading about it will make you think it’s inappropriate for children, but the background music and old-fashioned humor take all the negative vibes away.  Are you looking for best cat food reviews Click here. Sylvester is a “puddy tat” owned by an old lady named Granny. Created by Friz Freleng, Sylvester is the most famous cat under Looney Tunes, making his first appearance in 1 1945 short Life With Feathers. It was during 1947 when he met his archenemy, Tweety Bird, in “Tweetie Pie.” He was most known for chasing his enemy Tweety, but he had memorable run-ins with Hippity Hopper the kangaroo and Speedy Gonzales the mouse as well.

Sylvester’s trademark is his profound lisp. His voice and manner of speaking are somewhat similar with Daffy Duck, who also likes to rant and complain about things. He is prideful and persistent, but he always loses. 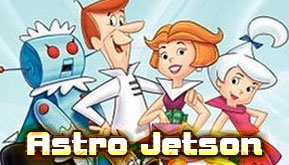 Astro is a speaking family dog from “The Jetsons,” a Hanna-Barbera cartoon that was first introduced to American audiences in 1962. He is voiced by Don Messick, who used the same type of sound to voice Scooby-Doo. Their show ran on ABC during the 1960s until the 80s.

Despite the stress he causes, the canine character is a best friend to his owner, George Jetson, the head of the Jetson family. Astro is clumsy and dim-witted but very loyal to his owners. He is a talking dog that can speak rough, dog-sounding English. 8. Lady and the Tramp

Lady, a purebred Cocker Spaniel, and Tramp, a mixed-breed stray, fall in love in Disney animated feature “Lady and the Tramp,” which was released in 1955. The cartoon tells the tale of the romantic story between the two dogs while also expressing heartwarming messages and depictions of harsh reality.

Lady, owned by couple Jim Dear and Darling, is portrayed as a beautiful dog who is rather demure, naïve, good and loyal. Meanwhile, Tramp is a laid-back, street-smart, ragged but handsome dog, who is Lady’s suitor. It is also implied that Tramp is flirtatious as he had a lot of girlfriends in the past – a fact that has angered Lady at some point. But because this is a Disney film, love wins out and the two end up together. Tramp is also adopted by the family and eventually had a litter of four puppies with Lady.

Their famous, swoon-worthy scene is when Tramp woos Lady over a plate of spaghetti. It is pure puppy love when their lips unexpectedly meet over a shared strand of pasta.