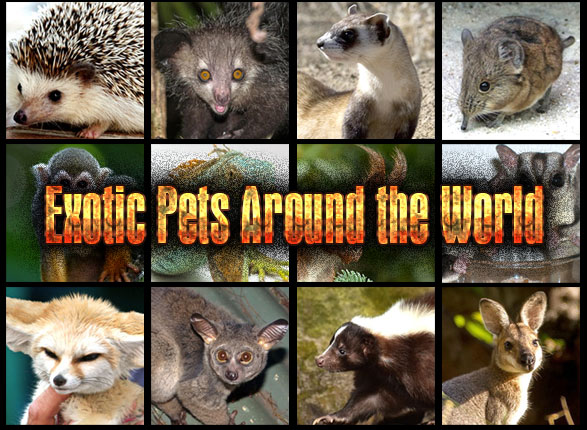 A lot of pet owners aren’t just satisfied with owning dogs, cats, birds, fish, and rodents. They would stretch things by owning exotic pets! If you want to own these kinds of animals (and all of them are wild), make sure they are the animals that can be obtained legally, and you are financially and emotionally prepared to take care of them. Although the ferret has been domesticated for more than a thousand years, it is still largely seen as an exotic pet. Although some ferrets are still used by man to hunt rabbits, most of the ferrets are kept today as pets. Ferrets are the descendants of the European polecat. Examples of primates usually owned as pets include monkeys, marmosets, orangutans, capuchins, chimpanzees and squirrel monkeys. Although these primates are in the hands of a thousand few pet owners, you should nevertheless be well-advised enough if you want to own one. Read our related article “Do Monkeys Make Good Pets?” to help you decide if monkeys and other primates are the ideal pet for you. Owning reptiles as pets have been surging in popularity for years. They can be quite docile when properly handled, even some snakes. Examples of reptiles to own as pets include iguana, tortoise, turtles, water dragon, bearded dragon, leopard gecko, etc. Each of them has their own needs so it’s good to know what they are — in terms of feeding, housing, proper lighting, and temperature — so that you will be able to provide for them better. We have the more familiar rodents such as hamsters, guinea pigs, gerbils, chinchillas, and domesticated rats, there are other rodents that are considered as exotic but can also be owned as pets. Examples are the degu, the common squirrel, flying squirrel, prairie dog, chipmunk, spiny mouse, Patagonian cavy and even the capybara, which is the world’s biggest rodent. Although it is small, furry and long-snouted, the shrew is not related to rodents. Rather, they are more closely related to moles. Unlike domesticated pets or even some other exotic ones, most shrews will never develop a good rapport with humans. They naturally don’t like being kept as pets. Plus, they have a high metabolic rate thus they need to be fed constantly when not sleeping.

But if you must because your hungry cat has just spit a shrew (shrews taste really bad to animals), you should be welcome to the challenges when taking care of it. Sugar gliders are popularly kept as exotic pets because of their size and adorable appearance. They look like rodents but are actually marsupials (like the kangaroo and koala). They tend to be affectionate to their human owners (sugar glider are social animals) and are also playful. Fennec foxes are cute to look at, but that big-eared cuteness belies the challenge of taking care of them. Sure, they are friendly but don’t expect them to be totally domesticated like your dog or cat. Despite that, they have a combination of traits of the cat and dog. Fennec foxes have the energy and playfulness of a dog but have the size and independent personality of a cat’s. A good deal of feeding, playtime and socialization is needed, and taking care of them can be quite time-consuming. More commonly known as a “bush baby,” a galago is a nocturnal, tree-dwelling monkey. Like many primates, a galago is also challenging to be kept as a pet. You’d be surprised that skunks are also popularly kept as exotic pets, that is if their foul-smelling scent glands are removed. Although skunks can do well with living indoors, owning one is not legally allowed in many states and countries because they are rabies vectors. The close relative of the kangaroo, the wallaby is also a popular exotic pet. If you have small backyard, that won’t cut it for the wallaby. Wallabies need an expansive space to run and to graze, so at least a 6×6 foot outdoor enclosure will be needed. A wallaby who has been reared by humans since young will definitely have a close bonding with them. They will follow you around the house and can get along with your other pets. A white lion is also a unique animal to care for. White lions are not albinos, but rather their whiteness is a recessive trait. Because of their rarity, it’s no doubt that they come off as expensive. Only purchasing a white lion cub, for instance (as long as obtaining them is legal), can set you back at around $140,000. So imagine how much it will cost you when it comes to food and maintenance. Owning lesser anteaters are legal in most states. Also known as a “tamandua,” a lesser anteater requires special care, at a cost of course! Since then it is fairly arboreal, it needs something to climb on such as a cage with lots of trees. Its diet, as the name implies, mainly consists of ants and termites, but you can feed it with fruits and meat. A lesser anteater loves to play and also demands lots of attention! If you are not the sort who would like to devote extra attention and care to such animal, leave the anteater alone and choose a fish bowl instead! Some amphibians are usually kept as pets. Aside from the usual pet frogs and toads, owners would also like to keep the more exotic ones such salamanders and newts. When you want to own a pet frog for instance, you should buy the ones that are born in captivity. It’s better that way. The aye-aye is lemur native to Madagascar. Its most distinct feature is its teeth, which are like a rodent’s — growing non-stop. For this, it was once classified as a rodent for many years but recently it has been identified as a primate, which links them closer to monkeys, gorillas, and even us humans.

The aye-aye’s appearance is far from cute. It is ugly, even frightening. Probably this is the reason why it is considered a bad luck in Madagascar, and people would kill one once they spot it. Sadly, this superstition leads to this helpless animal’s decimating numbers, and it is now considered as an endangered species. The ongoing conservation efforts have brought back some of its population, and continue to do so.

Aye-ayes usually don’t make good house pets, as they are naturally inquisitive and are not easy to be tamed. They also move quickly, so if they ever escape from their cage it would be difficult to get one back to their cage. A lot of time, patience and commitment should be allotted to taking care of this animal, as all the other exotic pets.