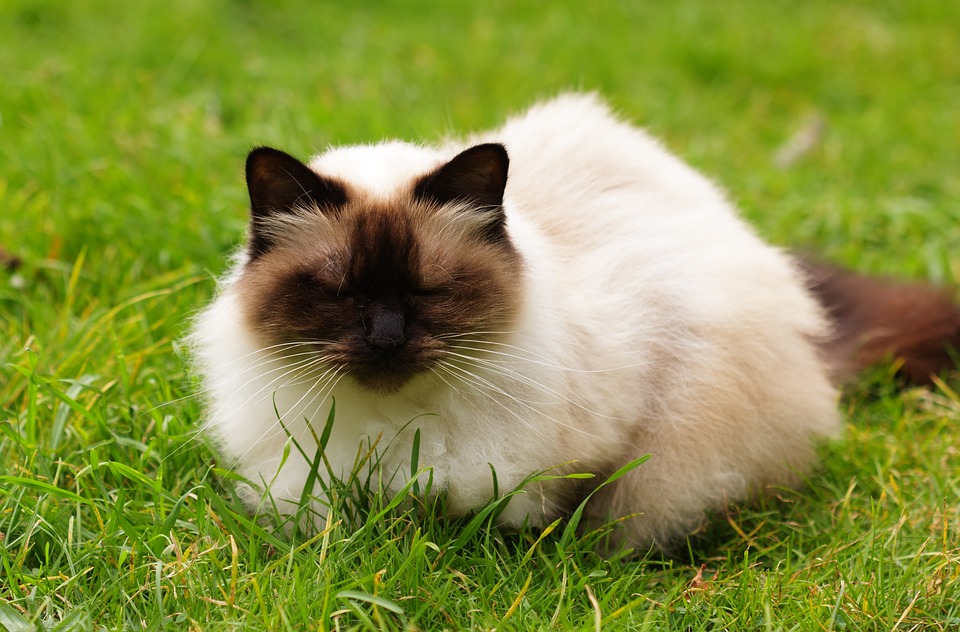 The Himalayan or nicknamed as Himmy is a breed or sub-breed of long-haired cat that is identical in type to the Persian. The only exceptions are its blue eyes and point coloration that came from crossing the Persian cat with the Siamese cat and then breeding their offspring until the desired characteristics were achieved. In Europe, the breed is known as Himalayan Persian or Color Point Persian. Let us know more about the history and characteristics of the Himalayan cat breed.

The Himalayan is a man-made breed that’s developed by crossing Persians with Siamese cats to create the color points and blue eyes of the Siamese. It was in 1931 when breeders began to work toward this goal, at first simply to know how the color point gene was passed on. Cat breeder Virginia Cobb and Harvard Medical School researcher Clyde Keeler developed longhaired cats with the distinctive color points of the Siamese through selective breeding over a period of years. Newton’s Debutante was the first kitten to be called a Himalayan.

The British and North American breeders became interested in achieving a Siamese-pointed Persian in the 1950s. To get the color point pattern, they started with the Cobb-Keeler procedure. After that, they bred the cats back to Persians to establish breed type. When the cats where bred successfully, the recognition as a breed was sought.

It actually depends on which cat association you talk to whether the Himalayan is considered to be a variety of Persian or a distinct breed. In 1957, the Cat Fanciers Association recognized it as a distinct breed, but the CFA Board of Directors decided to reclassify it as a color variety if the Persian in 1984. Another association that recognizes the Himalayan as a color variety of the Persian is the American Cat Association.

In the present time, Himalayans are among the most popular of pedigreed cats.

Characteristics of a Himalayan Cat

Just like the Persian cat, the Himalayan has a round body with short legs, making it challenging for them to jump as high as other cats do. Himalayans come in two types which are the traditional doll-face and the ultra-typed which has more extreme squashed-looking facial features. The traditional doll-face Himalayan has very large and round eyes with leather nose placed directly between the eyes and they are usually used for show. Pet Himalayans, on the other hand, may have longer noses and muzzle and may have smaller eyes than show cats do.

Their coats can come in different color points such as blue, lilac, seal, chocolate, red, and cream. They usually have a bulk of fur on their body that is white or cream but their points come in many different colors. The most difficult to produce are those with chocolate and lilac points because both of their parents should have the gene for chocolate or lilac to produce the kittens.

Himalayans are known to be sweet, docile, and quiet pets. They can be ornaments to any home where they enjoy sitting in laps and being petted by their humans. They only give attention to their family members and sometimes for a few guests whom they feel are trustworthy. Himalayans do not like loud and noisy environments because they are cats who prefer living in a serene home.

A Himalayan cat will let you know if its hungry with its soft and pleasant voice. It is a cat that is unlikely to climb up your curtains, jump on your kitchen counters, or perch on top of your fridge. When you’re not at home, it can patiently wait on a chair, sofa, or bed, until you are free to give it some attention which it would willingly receive but would never demand.

Himalayans aren’t the best choice when you have a house that is full of boisterous children but they can be good around gentle children and as well as with a cat-friendly dog who will not chase them around. Caring for a Himalayan Cat

Himalayan cats need daily grooming because their long and beautiful coats will not stay clean and tangle-free on their own. You should comb your pet’s hair daily and bathe it regularly at least once every month. Another important thing to consider is to keep your Himalayan’s litter box clean because litter may become lodged in your pet’s paws or coat. Also, when its litter box is kept unclean, your pet might just stop using it.

This cat breed can experience excessive tearing and to avoid under-eye stains from forming, wipe the corners of its eyes daily. Remember to brush its teeth to prevent periodontal disease either weekly or daily. Himalayans should be indoor-only cats because they are not scrappers and might fare poorly against other cats, dogs, and other animals outside.

When feeding your Himalayan cat, it’s better to set up a regular feeding schedule to keep your pet in shape and at a healthy weight. Also, provide your pet with plenty of fresh and clean water to keep it hydrated. You can consult your local vet to know more about the kinds of food and diet you can give your pet to keep it healthy and in a good shape.

The Himalayan is perfect for those who are looking for a sweet companion at home. So, if you’re someone who’s searching for a loving pet that you’ll groom and take care of every day, then the Himalayan cat is a great choice for you.