If you have been fascinated and entertained by the Top 12 Small Dog Breeds, you also might be interested in our “Largest Dog Breeds” gallery. Intending to keep a big dog for your own and your family’s safety? Check out this gallery and learn general information about each breed! Remember that like their minuscule counterparts, every large dog has also its own disposition. So if you can afford to keep and care for a large breed, you must wisely choose one that will suit your needs, and your own temperament, as well. Origin: the country of the Neapolitan Mastiff is Italy, but its ancestors trace way back as far as 3000 BCE (the beginning of the Bronze age).
Weight: Generally 110 to 200 pounds
Height: Usually they are measured at 2′ to 2’7″ tall at the withers (shoulders)
Lifespan: 8-10 years

Temperament: This breed is fearless, loyal, and extremely protective of his family and property. Neapolitan Mastiffs are also intelligent and have the tendency to think independently. Some owners say that despite its size, a Neapolitan Mastiff is an affectionate dog who thinks he’s a lap dog. Still, such breed needs to be socialized extensively or else they tend to be aggressive towards strangers or other dogs. Neapolitan Mastiffs are trained to be as a guard, utility, and working dogs. Origin: Historians trace the mastiff’s origins to its extinct ancestors Molossus, bred by the ancient Greeks. Several other breeds (like the Neapolitan mastiff earlier) are derived from the mastiff.
Weight: 130 to 200 pounds
Height: Usually they are measured at 2′ to 2’8″ tall at the withers (shoulders)
Lifespan: 6-10 years

Temperament: Like any other dogs, mastiffs are courageous and protective of their home and family. However, they are generally good-natured, calm, and affectionate. They usually prefer to stay indoors. However, beware of the dog’s drool splattering whenever he shakes his head! Luckily, it can be easily cleaned and wiped off. Temperament: If you want a “family dog,” choose this breed! Leonbergers are protective of their home and family yet, loyal, friendly, and submissive to their owners. This breed is very intelligent. If trained very well, they can be quite at ease with other people and other dogs. No wonder they are also being called “The Gentle Giant.” However, they shed quite heavily, so you might not want to consider a Leonberger if you and your family members have allergies. Temperament: The tallest among all the dog breeds, Irish wolfhounds can reach up to a fearsome-looking seven feet on their hind legs. Obviously, the Irish wolfhound is used to hunt wolves as well as track down and chase other moving prey. Although the breed’s temperament can be varied, Irish wolfhounds are generally intelligent, perceptive, and introverted. Like any dog though, an Irish wolfhound is not for everyone — its size alone is a consideration, and also its relatively short lifespan. Unlike most dogs who crave for human interaction, Irish wolfhounds are somewhat loners. However, they can also be quite gentle with children — sometimes, they also love to give sloppy kisses to their owners! Temperament: For centuries, the Great Pyrenees has been used to guard flocks alongside shepherds. Being a working dog as well, this fluffy canine also teams up well with people who are engaged in rescue and therapy work. As you might expect, this is a dog that is confident yet gentle and affectionate, especially with kids. While fiercely protective and territorial of its property, owners, and the flock as he is trained to be, a Great Pyrenees keeps its calm and collected demeanor very well. Like many dogs, it’s also very intelligent and loyal. Temperament: Originally bred and trained to hunt wild animals, the Great Dane now mostly serves as a working dog or companion pet. Like the Neapolitan Mastiff, the Great Dane is also bred from mastiff-type canines.

The Great Dane’s disposition might surprise you. Although courageous, he’s otherwise loyal, sweet, gentle, loving, and affectionate dog — such behavior belies his imposing size. While he won’t have second thoughts to defend its owner, he’s otherwise generally well-behaved towards other dogs and other pets, as well as humans familiar to him. Like the Neapolitan Mastiff, the Great Dane thinks he’s a lap dog despite its gigantic size! Despite its short stature compared to other dogs in the list, this “Dogue” has quite a massive head. In fact, the Dogue de Bordeaux probably has the largest head of any breed in proportion to its body. Apart from that, this breed is quite fearless and often arrogant and stubborn. However, he is also known to be sweet and gentle. As long as he’s extensively trained, this Dogue will be all right with strangers and other dogs. Temperament: The Cane Corso is a type of Italian mastiff dog, and a very close relative of the Neapolitan Mastiff.

This breed looks fearsome — and it generally is. Cane Corsos rarely fight especially towards a family, but can react defensively especially when a real threat approaches them. Territorial and fearless, Cane Corsos make an excellent guard dog. However, this is not a breed for novice dog owners. That’s why it’s highly recommended that a Cane Corso puppy should be extensively and patiently trained as soon as possible, and encouraged to start socialization with other people and other dogs. Cane Corsos are highly active and can be easily bored when just sitting around. That’s why you must give them a “job” — or else they can start doing their own “business,” including running around the yard and chewing your furniture. Temperament: Bred by English gamekeepers to guard England’s great estates during the 19th century, bullmastiffs were trained to be protective, strong, fearsome, and fast.

Consistent and patient training, as well as high socialization from early on, will make bullmastiffs well-behaved family pets. However, the dogs’ natural protective instinct towards their homes and owners — a trait they obviously inherited from their ancestors — make bullmastiffs excellent guard dogs. But they can also be calm, mellow dogs who are contented with just a few outdoor walks. 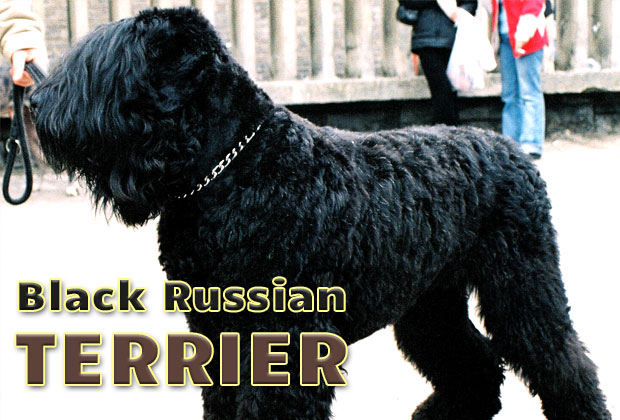 Temperament: Black Russian Terriers had been once exclusively trained by the Russian state as military, police, and working dogs, until in the late 1950s when they also began to be bred and owned by civilians.

Since these canines were initially bred and trained to defend and protect their territory and their owners, their guarding behavior is highly instinctive. Black Russian Terriers are intelligent, agile, alert, and responsive. This very intelligence means that they can easily get bored (and even destructive) if they don’t have a job to do, so you must give them tasks, as well as tricks to help keep them stimulated. Temperament: Newfoundland is a large and strapping breed who also come from the mastiff types. It’s just one of the few dogs with webbed feet. Despite its size, a Newfoundland is otherwise placid, sweet, affectionate, and loving. He especially likes being around children, and according to some kennel club members, he can be a natural when it comes to babysitting. And like many dogs, the Newfoundland is protective and loyal. He shares some traits with the Labrador Retriever such as an eagerness to please his masters.

Having webbed feet and oily, water-proof coat, large bones and powerful lungs, these equip the Newfoundland for swimming — and they were born for that! In fact, they can even swim at great distances. The coat also enables these gentle giants to be protected against chill. These things make the Newfoundland excellent working dogs. However, they tend to drool excessively particularly during hot months. Temperament: With its superior sight and hearing, an Anatolian Shepherd makes an excellent livestock guard dog. He is a large, rugged, strong, and confident dog who makes its decisions independently regarding guarding his flock — whether it is an animal or a human. Although he looks and is actually intimidating, he also appears calm and is quite friendly, especially to his human masters. He will be suspicious of the predators who linger around his flock, or of strangers who attempt to enter his master’s property. This dog is not for everyone, especially novice owners, owing to his large size and special needs. Temperament: You can recognize a Bernese Mountain Dog through its showy tri-color coat — white, brown, and black. This is your typical outdoorsy dog, who loves hiking with his masters, and is traditionally trained to be a shepherd or draft dog. The Bernese loves learning and doing something, like other active canines. He is generally a gentle dog, affectionate, easy to train, and eager to please. The Bernese also loves being around children and exhibits a lot of patience around them even when kids try to piggy-back ride him. This beautiful dog can be goofy sometimes, especially when he’s with his family (human family, that is).

If you intend to get this gorgeous dog, be sure to look for the reputable breeders. Bernese Mountain Dogs’ numbers are struggling — because of their looks alone, they have become the target of unscrupulous breeders who pay no regard to the health outcome of these dogs. As a result, these poorly-bred dogs will have health problems which definitely shorten their lifespan. Temperament: A Saint Bernard is a classic “Gentle Giant” dog — despite its gigantic size, he’s sweet, affectionate, patient, and loving. He is the kind of dog who loves to snuggle up with his owners while they are reading or watching television.

Apart from their enormous size, the Saint Bernard is also famous for being a rescue dog, through stories of their heroic deeds of rescuing lost travelers in the Alps. They were bred by monks at the hospice on the Great St. Bernard Pass during the 18th century.

He’s also sweet and patient towards kids. However, his large size should still be a concern for those having smaller children, who can get easily knocked over with just a simple swipe of his enormous paw.

Although not instinctively protective, a Saint Bernard will bark when there’s a threat approaching him. We guess he doesn’t need much effort to bark, because his size alone is a deterrent against possible intruders Temperament: Scottish Deerhounds were originally bred to hunt and bring down big red deer that roamed the Scottish forests. Although a Scottish Deerhound will forever have that “hound dog” trait in his blood, today he mostly enjoys long walks outdoors, running and chasing, nice regular meals, and a comfy sleeping place. He loves to stretch out on the floor or on a large couch sleeping.

Another “Gentle Giant,” a Scottish Deerhound is gentle, sweet, and very friendly. He is docile and eager to please his owners. And since he has the hound dog instinct, he tends to run and chase. Those who consider a Scottish Deerhound must have ample space for him to move around, or take him outdoors to walk often which helps to maintain his weight and overall health. Although he does excellently in rural areas, he will also do well in the city provided that the owners take him to urban parks and participate in some games with him there, such as fetching sessions. Temperament: Tibetan Mastiffs were bred in Tibet centuries ago, for the original purpose of livestock guarding. A big, strong, and powerful dog, he can confront wolves and leopards bigger than him; however, he also warns his predators to prevent direct conflicts.

This is not a breed for everyone. A Tibetan Mastiff is intelligent but quite stubborn — although he loves being with his owners, he won’t obey them especially when he believes he’s in the right. That’s why few owners find success in entering Tibetan Mastiffs in obedience and agility trainings. He should be consistently trained, socialized, and disciplined — or else he will turn into a destructive creature. Since he’s mostly nocturnal, a Tibetan Mastiff will do well as a sentry during the evening, though it’s not recommended that he should be left alone all night with neighbors nearby.