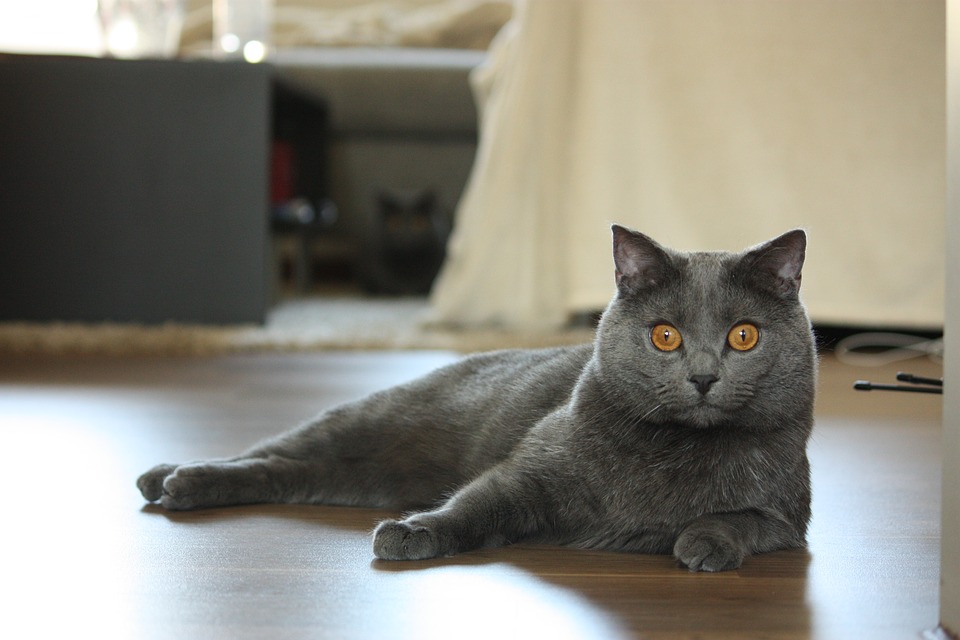 The Chartreux is a rare domestic cat breed that originated from France. They are known for their “smile” because of the structure of their heads and their tapered muzzles that often make them appear to be smiling. They are also sometimes compared to a mime because they are silent but communicative and other times silly. And just like every French cat with a pedigree, the first letter of their official name encodes the year of their birth. For example, if a Chartreux is born in 2011, its official name should state with the letter G. If you want to know more about this breed, read on and find out the history and characteristics of the Chartreux cat.

It was in 1558 when the Chartreux was mentioned for the first time by Joachim du Bellay in his poem entitled, “Vers Francais sur la mort d’un petit chat” or “French verse on a small kitten’s death in English. In 1747, there was another representation of a Chartreux in Jean-Baptiste Perronneau’s painting called “Magdaleine Pinceloup de la Grange” where the cat was painted as a pet which was quite rare during that time.

According to a legend, the Chartreux descended from cats that were brought to France by Carthusian monks and they lived in the order’s head monastery. However, in 1972, it was denied by the Prior of the Grande Chartreuse that the monastery’s archives held any records of the monks’ use of any cat breed that resemble the Chartreux.

There was also another legend that says Chartreux’s ancestors were feral mountain cats or what is now known as Syria. It is believed that they were brought back to France by returning crusaders in the 13th century, many of whom entered the Carthusian monastic order.

In the 18th century, the first documented mention of the breed was by a French naturalist Buffon. However, the breed was greatly diminished during the First World War and after the Second World War, wild populations were not seen. But some European breeders made effort to keep the breed from extinction.

In 1971, the first Chartreux were brought to the United States by Helen and John of La Jolla, California. Later on, the Cat Fanciers’ Association advanced the Chartreux breed to championship status in 1987. As of 2007, there are less than two dozen active Chartreux breeders in North America.

Some of the famous, historical people who owned a Chartreux include French President Charles de Gaulle, French novelist Colette, and Charles Baudelaire.

Characteristics of a Chartreux Cat

The Chartreux has a sturdy and powerful body like a working cat. It is wrapped in a short, thick, water-repellent coat. Aside from having beautiful fur, its most distinctive feature is its deep orange eyes that are set in a rounded, broad head. It has full cheeks and a sweet smiling expression. It has medium-size ears that sit high on its head.

The body type of the Chartreux is sometimes described as primitive because it is husky and robust with broad shoulders and a deep chest. It has relatively short and fine-boned legs that rest on its round and medium-sized paws that look almost elegant. It has a medium-short double coat that has a slightly woolly texture which varies depending on its age or the climate in which it lives. Their coats can be any shade of blue-gray and the tips of the fur look like they have been lightly brushed with silver. They have a slate-gray leather nose, blue lips, and rose-taupe paw pads.

Chartreux cats are silent but communicative, and they are sometimes silly. Its idea of a perfect day is short playtimes interspersed with naps and meals. This breed is attentive and is a gentle companion who loves to stay near its people and observe what they are doing. It appreciates any attention given to it especially when it involves scratching beneath its chin or between the ears. Even though it likes attention, this cat is not demanding and it can be content to follow you around, sleep on your bed, and snuggle with you when you’re not feeling well.

The Chartreux is an adaptable cat with a middle-of-the-road personality. It is not a social butterfly, but it’s not shy either. It will watch and wait first before it decides whether to greet a guest or involve itself in the situation. It is also tolerant and gentle, making it a great pet for homes with children. It can also live happily with cat-friendly dogs.

Caring for a Chartreux Cat The Chartreux is known for its woolly blue coat and it requires combing instead of brushing to maintain its beauty. It only sheds its undercoat twice a year and it’s best to comb it daily during those times to keep the flying fur under control. A bath is rarely necessary for this cat breed and if ever it will require one, remember that it takes time to get its water-repellent coat wet enough for bathing.

The rest of the grooming this cat breed needs are basic care such as trimming the nails regularly, cleaning the ears, and brushing the teeth frequently. Remember to keep its litter box clean as well because cats are particular with bathroom hygiene and if they notice that their litter box is dirty, they might use other parts of your house as their bathroom.

When it comes to food, Chartreux can have sensitive stomachs and very rich food can make them sick. Make sure to feed them a meat-based diet and avoid foods that contain less than 40 percent protein. You should also monitor their weight especially when they are getting older to prevent them from becoming overweight. If you’re not sure of what kinds of food and diet you should provide them, it’s better to consult with your local veterinarian to get some advice.

To keep your Chartreux safe, make it an indoor-only cat. This will prevent it from being attacked by other animals outside, and from being hit by a car as well.

The Chartreux is a pleasant companion cat and it is a good match for single people because it plays in spurts and it is comfortable by itself or with its human. But it can also be a great pet for families and households with children.