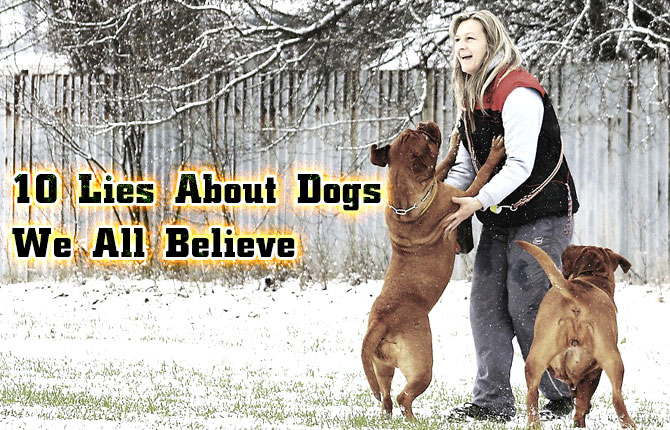 Understanding the behavior of our pet dogs helps us to take care of them better. When our dogs don’t act normally as they should or are not feeling well, we take appropriate actions to address such behavior. Unfortunately though, the information that we receive about dogs is mostly untrue. Here in this gallery we reveal about the common misconceptions and lies about man’s best friend. You may have heard that dogs are color blind, that they are able to perceive things in black and white.

While a dog’s sight doesn’t possess a wide range of colors as humans do, it does have the ability to perceive things in yellows, blues, and violets. It means that other colors we normally see such as red, green and orange are not accessible to dogs and other canines.

But dogs have excellent night vision, an advantage that humans lack. While this isn’t entirely untrue, a dog wagging his tail doesn’t necessarily mean he’s happy or excited to see you. Unlike humans, dogs do not express their feelings or do not communicate through facial expressions. Instead, they use their tails. Learning the movements of your dog’s tail will help you understand it better.

About the wagging — if the dog is happy, its entire rear body will mostly tend to excitedly sway along with its tail. When you come home from work, for example, you will notice your dog acting in this way. Some pet owners equate the temperature and dampness of their dogs’ noses to their general health. However, a dry, warm nose doesn’t necessarily indicate sickness on the dog’s part. The condition of your dog’s nose varies from day to day. A dog with a dry, warm nose could be as healthy as a dog with cold, damp nose.

In fact, the temperature and wetness of your dog’s nose isn’t even a reliable indicator of your dog’s health or illness. A dog’s sudden change of its eating habits, appetite or behavior can be more accurate indicators. We display our love and affection towards our doggies by hugging them. However, dogs do not interpret this action the same way as we do.

It’s because in dog behavior, putting a limb over the body is a display of dominance. This makes the dominated dog feel anxious, and he typically reacts to it by becoming stiff, closing his mouth or licking his lip.

Wrapping our arms around pet dogs is our display of affection to them; but to dogs, they see this as dominance. But this reaction can vary from dog to dog — some dogs seem okay with being hugged. If your dog doesn’t like hugs, you don’t have to worry — Fido doesn’t change your opinion of you and he still loves you! There is a common misconception that when dogs are sick, they eat grass in order to purge something harmful out of their stomachs. This is entirely untrue, as the grass is actually hard to digest. In addition, dogs do not the have multiple stomach system that cows have, to help them digest it.

There are several reasons why dogs eat grass. As we humans have food cravings, dogs have them too. But in this case, dogs have cravings towards nutrients that they are lacking, so they may eat grass to satisfy their need for fiber. At other times, dogs eat grass to literally taste if someone has stepped into their territory — but this behavior exists only in extremely paranoid or territorial canines.

Another reason why dogs eat grass is simply that they enjoy the taste. Unfortunately, this behavior may lead them to vomit since grass is hard to digest. If you see your dog twitching and whimpering while he’s asleep, he appears to be having nightmares. So naturally, as a loving dog owner, you think that waking him up from his nightmare is the best thing to do. However, there’s one thing about this misconception — we are not sure if dogs do really dream. This matter has been debated for some time now.

But dogs, like us humans, experience REM (rapid-eye-movement) in their sleep. While we are dreaming, our brains are laying down memories — an ability which dogs also have. So in theory, if your dog is having dreams, waking them up means that you are actually putting down his happy doggie memories.

Like us humans, dogs also need a certain amount of deep sleep as it is good for their mental health. Dogs tend to sleep up to 16 hours a day, but most of the time it’s nothing more than a mere nap. They still need some long, uninterrupted sleep that we are able to achieve. What if (and when) Fido is actually having a good, deep sleep? Just leave him alone, even if he experiences twitching and whining as if having dreams or nightmares. Waking him up may actually do more harm than good. Bacon is meat and so meat is an important part of any dog’s diet. Even though bacon sounds like a good idea for a doggie treat, you would not rather get one for Fido.

Why? The bacon’s high levels of grease, saturated fat and sodium is a recipe for a potential killer to your pet. Too much salt in bacon can lead to bloating, twisting of the intestines, and high blood pressure. The grease and saturated fat can cause pancreatitis, which can be fatal to your dog.

While you feel sorry at times by not giving Fido a bacon treat, at least you’ll be saving his life in the long run. Do NOT leave your dog inside the car — even if you’ll be gone in a minute, and yes, even in cooler temperatures. Leaving the dog alone in the car pretty much equates to leaving him inside the oven and turning up its heat — temperatures inside the car can rise as high as 100 degrees! Besides, this act is illegal in some states. A lot of food products for human consumption like bacon (mentioned earlier) and chocolate can be harmful to your dog, and even fatal. An ounce of dark chocolate may be enough to kill a small pooch.

Chocolates are harmful not only to dogs but also to cats, birds, and any other pets. Not all. Sure, their size may seem intimidating, but you’ll be surprised that some big pooches are just puppies at heart. The world’s largest dog, the Great Dane, is actually a friendly, gentle and loving animal who is tolerant towards other dogs and other pets. They even think of themselves as lapdogs! Other gentle giants include the Bullmastiff, Newfoundland, Saint Bernard, Great Pyrenees, etc.

In contrast, the Chihuahua — the world’s smallest dog breed — can be even more aggressive than other bigger pooches.