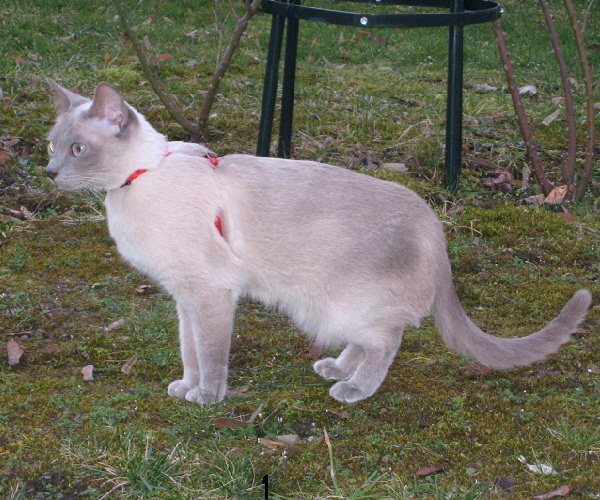 The Tonkinese cat is a crossbreed between a Siamese cat and a Burmese cat. It is known to be a great pet because it has a goofy and humorous personality that can be quite entertaining. The short-haired Tonkinese is the best-known variety but there are also medium-haired ones that are more popular in Europe, mainly in Belgium, France, Germany, and in the Netherlands. If you’re interested to know more about the breed, then read on to find out about the history and characteristics of the Tonkinese cat.

The Tonkinese cat breed, as mentioned above, is the love child of the Siamese and Burmese breeds which both came from Southeast Asia. They were crossed in an attempt to create a cat that has a moderate body type, loving, intelligent, and has less piercing voice than the Siamese. However, the story of these cats’ affair started with a case of mistaken identity.

Dr. Joseph Thompson owned a small, dark-brown cat named Wong Mau which was brought to him by a sailor upon knowing his interest in felines. At first, Wong Mau was thought to be a Siamese cat with a chocolate-colored coat. In the 1880s, Chocolate Siamese cats were described as having tan or brown bodies and have seal-brown or almost black points. They eventually disappeared in Britain but still existed in Thailand and Burma or what is now known as Myanmar, where there were probably the natural offspring of free-roaming Siamese and Burmese cats and Wong Mau was one of them. It was Wong Mau’s destiny to become the matriarch of two new breeds which are the Burmese, and later, the Tonkinese.

It was in the 1950s when the first deliberate crosses between Siamese and Burmese started with Milan Greer, who called the cats, “golden Siamese”. He did not continue with the breeding, but there were other people who became interested in producing a dark-brown cat that has points. To do so, they crossed Siamese cats with Burmese cats.

In 1967, the Canadian Cat Association began registering the “Tonkanese”. Other cat associations eventually followed but some associations, such as the Cat Fanciers Association did not recognize the breed until 1984 which was almost 20 years later.

The name of the breed under its original spelling of Tonkanese was believed to reference the musical South Pacific. It has an island where no one discriminated against “half-breeds”. However, there was often confusion about the spelling of the name with the exotic-sounding Bay of Tonkin in Vietnam even though the cats had no association with that country. Because of the confusion, the name was officially changed to Tonkinese in 1971. Characteristics of a Tonkinese Cat

Tonkinese cats are medium-sized and they are deceptively muscular. They weigh 6 to 12 pounds but can become heavier than expected when picked up. They have slim legs and tails but these are proportionate to their bodies. Their heads are gently rounded and slightly wedge-shaped and they have blunted muzzles. Their eyes are moderately almond-shaped and their ears are set towards the outside of their ears.

The Tonkinese cat has four base colors that are officially recognized by the Cat Fanciers’ Association and these are natural or medium brown, champagne, blue, and platinum. European Associations, on the other hand, also accept red, cream, caramel, apricot and tortoiseshell, cinnamon, and fawn. Their coats come in a medium thickness and they feel soft and silky.

Tonkinese cats are friendly, active, and loving pets. This breed will make you change your mind if you think that all cats are aloof and independent. It’s because they always demand attention and affection, and they will not rest until they get it. It is the kind of cat that will follow you around the house and ride on your shoulder. They also love to meet new people.

Aside from being friendly, they are also playful, brainy, and active. They love to jump to high places and can master puzzle toys as well. They are also talkative cats, although their voices are not as loud and as rough as that of a Siamese cat. They are also sweet pets who love to sit in laps. They are also great pets for families with children because they can play fetch just like pet dogs. When it comes to other pets, they can live peacefully with cats and dogs who respect their authority. Caring for a Tonkinese Cat

Tonkinese cats have soft and short coats that are easy to take care of. You just need to brush them weekly to remove dead hair and to distribute skin oil as well. Bathing them is rarely necessary. To avoid periodontal disease, it’s also important to brush their teeth daily. Their eyes may sometimes have dirt and discharge and to clean them, use a soft, damp cloth to wipe the corner of the eyes. Remember to keep their litter box clean because just like other cats, they are very particular about bathroom hygiene.

The Tonkinese cat is an indoor-only type of cat. Keeping it indoors will protect it from getting diseases from other cats, being attacked by dogs and other animals, and from being hit by a car. Also, letting them go outdoors will put them on the risk of being stolen.

You can feed Tonkinese cats with normal cat foods. They are generally healthy and it’s unlikely that a special diet is needed.

Tonkinese cats are indeed robust, fun loving, and companionable pets. Therefore, if you’re looking for a great pet that is low maintenance and can get along well with your kids, then the Tonkinese cat is a good choice for you.