The Abyssinian or Aby is a short-haired domestic cat which is among the most popular cat breeds. It has a tabby coat that features bands of colors, giving it richness and depth that are not seen in any other breeds. Unlike other cats that love to sit on laps, this breed is smart, silly, and impressively athletic. In fact, it stays in constant motion and it always loves to jump, climb, and explore. Let us find out more about the history and characteristics of the Abyssinian cat breed.

In the late Victorian era, showing cats is very popular. In 1871, one of the unusual cats exhibited at the Crystal Palace Cat Show was an Abyssinian captured in the late Abyssinian War, and it took the third place. On January 27, 1872, there was a report on the cat show that was published in one issue of Harper’s Weekly which was the first mention in print of the breed. However, there are no existing records and information about the cat’s origins but there are myths and speculations about it.

There are claims that the Abyssinian cat was the cat of the pharaohs and it originated in Britain. Based on that claim, it was developed by crossing silver and brown tabbies with cats that had “ticked” coats. However, based on genetic evidence, the cats came from Indian Ocean coastal regions and parts of Southeast Asia.

It’s possible that British and Dutch traders may have brought the cats from ports such as India, Calcutta, or the islands of Indonesia. In the 1830s, there was a taxidermied specimen of a ruddy ticked cat that was exhibited at the Leiden Zoological Museum in the Netherlands. It was labeled, “Patrie, domestica India,” which gives credence to the theory.

The name Abyssinian probably came from the place Abyssinia which his now Ethiopia, where Zula, the cat exhibited at the Crystal Palace, was said to have come from. The introduction of new coat colors and the gene for long hair might have come from early pedigrees show crosses to non-Abyssinian cats.

It was in 1900 when American cat fanciers first imported some Abyssinians to the United States. But it wasn’t until the 1930s when the breeding programs for Abyssinians started, during the time when more cats were imported to the United States. It was because the Second World War has devastated the breed and only a dozen had survived in England by the end of the war. However, the breed was able to bounce back and it is now one of the most famous cat breeds. Characteristics of an Abyssinian Cat

The Abyssinian is a medium-sized cat that has a long body and nicely developed muscles. It is moderate-looking in all aspects and has smooth planes on its head and a gentle dip in the triangular head. Its ears are large and they sit tilted forward on its head, giving it an alert and aware look as if it is always paying attention to everything that is going on around. Adding to this is its eyes which look large, showing more alertness and intelligence.

Abyssinian cats have short coats and have tufts of hair in their ears. Their colors are very special because majority of their fur has bands of color on each individual hair and their coats look darker along the spine line. Their body color softens and lightens under the neck and the underside, as well as the insides of their legs. Their body color makes them look like they have just walked out of the wild.

When it comes to personality, the Abyssinian is probably the breed that lives life to the fullest. It’s because it’s a very energetic cat that loves to climb high, jump far, and play non-stop. It can also notice almost anything, making it both entertaining and challenging to live with it. They also tend to take things that catch their interest.

Abyssinians are playful and persistent cats that adore being the center of attention. They can quickly learn tricks and they like to run a feline agility course. In fact, it seems that this cat never sleeps. But even though they love to climb high, they are naturally graceful and they rarely break items unless out of curiosity. They definitely belong in homes where people will give them plenty of love and attention.

It is also a great cat breed choice for families with children and cat-friendly dogs because it will play with your children different games like fetch. They are also known to get along with large parrots and other animals. 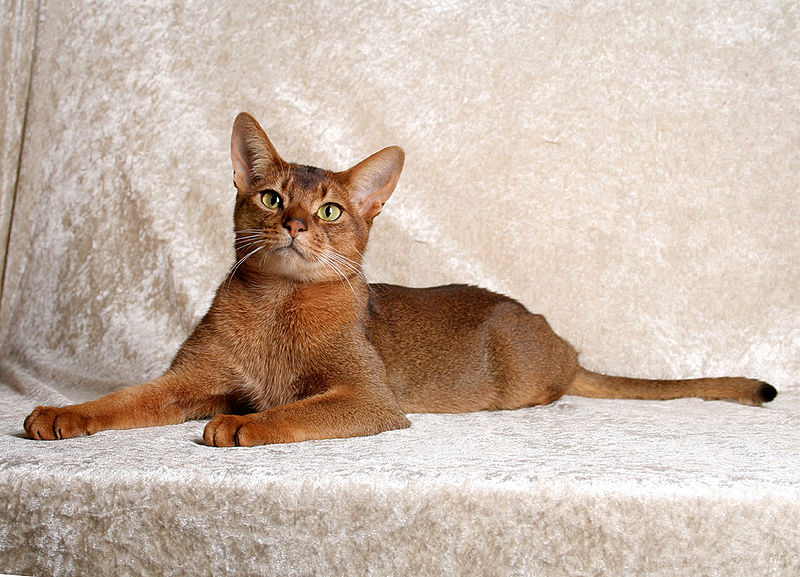 Caring for an Abyssinian Cat

Abyssinian cats have short, fine coats that can be easily taken care of with weekly combing. This will help in removing dead hair and distributing skin oils. During their shedding season, you can give them a bath to remove excess hair quickly. It’s important to brush their teeth daily to avoid gum diseases. Remember to trim their nails every couple of weeks and wipe the corners of their eyes using a soft, damp cloth to remove any dirt or discharge.

It’s also important to always keep their litter boxes clean because cats are very particular when it comes to bathroom hygiene. Having a dirty litter box might urge your pet to use other parts of your home. Remember that Abyssinians are indoor-only cats and letting them go outdoors will make them prone to diseases spread by other cats, attacks from other animals, and the danger of being hit by a car. They might also get stolen if you let them roam around outside.

When it comes to food, the diet of Abyssinians is similar to that of other cats which require fresh meat and other foods that are high in protein with a mix of carbohydrates. Make sure that you balance the raw and dry food that you give them. You can also consult a vet to know more about the proper foods you can feed your pet.

The Abyssinian cat is an amazing cat breed and it is one of the best pets for people with an active lifestyle.