Russia may be famous for vodka, borscht, matryoshka dolls and the onion-shaped churches and historical buildings, but it also gave the world some of the most beautiful and unique-looking domestic cats. If you’re a cat lover in particular, you may probably love to check out these cat breeds that originated only in Russia: The Russian Blue’s name is derived from its silver-blue or grey-blue coating. It is a naturally-occurring breed believed to have originated in Arkhangelsk, northwestern Russia.

One of the most popular cat breeds, the Russian Blue is a quiet, reserved and curious animal, just like any other domesticated cats. However, it can be playful at times and is affectionate and loyal especially to its human masters. Another distinctive trait of the Russian cat is its trainability — it can be taught with some tricks like fetching and even opening doors. The Siberian cat’s long and dense coat has made it adaptable to extremely cold, snowy climates. The fur is textured but otherwise glossy, which reduces the chances of matting. Pet lovers who are suffering allergies will enjoy owning a Siberian cat because its fur is hypoallergenic. Despite its attractive and rather delicate-looking appearance, the Siberian is otherwise a hardy animal.

It is called by a couple of other names such as the Siberian Forest Cat and the Moscow Semi-Longhair. Like the Russian Blue, the Siberian cat is also a naturally occurring breed. Way back then, it used to be called “Bukharskie,” as it was believed that the breed originated from a city in Uzbekistan named Bukhara, and then was later brought to Moscow. 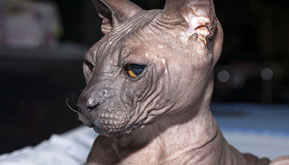 The Donskoy or Don Sphynx is one of the popular hairless cat breeds in the world today, similar to the Sphynx cat (but these two breeds are not closely related). The Donskoy cat was discovered in 1986 or 1987 in the city of Rostov-on-Don by a woman named Elena Kovaleva, who rescued a female kitten which was being tortured by a group of young boys.

When Kovaleva took the poor kitten, she discovered that it had gone almost bald. She thought maybe that it was the young boys’ maltreatment which had caused to lose most of its fur. Kovaleva decided to bring the kitten home to nurse it back to health and help the kitten to grow its fur back. She named the kitten Vavara.

But even so, Vavara had gone on to lose more hair, and in a matter month, she became completely hairless. When Vavara later had kittens of her own, some of her offsprings were almost hairless. Vavara’s hairless kittens, it is believed, are the ancestors of the present-day Donskoy cat.

It is believed that the Donskoy’s utter lack of hair was caused by a dominant genetic mutation. The Peterbald is generally an affectionate, genial cat who is also intelligent and energetic. It can go along well with kids and other pets. This beautiful feline is also a naturally occurring breed, having its origins in the Kuril Islands, a chain of islands which is currently disputed between Russia and Japan. The Kurilian Bobtail comes in long- and short-haired varieties, but they always have a “pom-pom”-like fluffy tail.

The Kurilian is one of the rare cat breeds that is actually comfortable to be in the water. In fact, this cat is a very good swimmer, and its natural affinity with water enables it to hunt and catch fish like its favorite, salmon.

This beautiful cat with bright blue eyes and long hair is a Siberian Version. It is named Maskaradna because the appearance of Nevskaya Maskaradna, especially the eye portion looks similar to a cat wearing a masquerade mask.

The origin of Ural Rex breed dates back the pre-war era however, they significantly reduced in numbers after the Second World War. As a social cat, this breed loves to be around people and enjoys children. By nature, they are quiet, balanced and in physique, this breed is pretty sturdy and solid.

Originated from Siam which is now known as Thailand, The Mekong Bobtail are the ancestors of Siamese and were first imported in 1884 to Europe and came to Russia in the 20th century. This breed has a medium sized athletic body, long legs and blue oval shaped eyes. Their life-expectancy ranges between 15-18 years and an adult bobtail can easily weight around 8-10 pounds. They are quiet in nature yet playful and known for their intelligence, friendliness and submissive behaviors.  Since they have a playful nature, they need company, toys and games to stay happy and engaged.

Russian cats are the most popular and expensive because they come with high maintenance and attitude. Unlike other cat breeds, Russian cat breeds need more pampering and adequate understanding of their handling. We hope this article and many others on our website give you handful of tips to make your cat comfortable and happy at your home.